Tartarus Mace of the Emperor Set 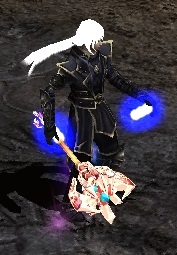 Tartarus Mace of the Emperor Set

A long time ago, written in the scrolls by the forefathers of the MU continent, there lived a Dark Lord Emperor, so tyrannical and ruthless that no one dared to defy. He ruled the continent of Mu equipped with his powerful mace, the source of his power, the one that made the Mu continent a lost continent.

Nobody knew where he came from but he was clearly thirsty for power. It is said that when he first came to the MU continent, he immediately summoned his minions to lay waste on it. He was so powerful that he was able to conquer one town after another. He led his army of Dragons and Fenrirs to destroy the Atlas Brave Knights of Lorencia. He was able to defeat Freya of Noria and sieged the Lizard Kings of Atlans. He also defeated the magical powers of Devias’s Alviss Wizards.

Then, the greatest battle in the skies of all Mu continent began. Big Dragons and ruthless Fenrirs were facing the Sky Warriors of King Garuda. Being warned, Garuda had the chance to form an alliance with the Brave Atlas Knights of Lorencia, Fairy Elves of Noria, the Wizards of Devias and the Lizard Kings of Atlans.

To completely stop the dark Lord Emperor, the council of Lorencia, the Fairy Elves of Noria, and Alviss Wizards of Devias decided the best punishment for a power seeker: entrapment. This way the Tartarus Mace became the deepest abyss of torment and suffering for the dark Lord Emperor.

By conjuring the magic of the Mu Continent the dark Lord Emperor was thrown into Tartarus. As he was falling towards the deep abyss, full of anger he grabbed the handle of the mace desperately fighting the sucking force of the abyss’s void. Failed in his attempt to escape, he also lost his ring.

Being afraid that the dark Lord Emperor might return, the ring and the mace were separated. The Tartarus Ring of Magic was taken by the Lizard Kings deep in Atlans and the Mace was hidden in the secret corners of the Castle in Valley of Loren.

Three thousand years later after the battle, an oracle of the elves received a vision. She went to Karis, the legendary Argo armor wielder, telling her what she had seen. Fiery fields, burning mountains, and boiling seas will precede the coming of the dark Lord Emperor. The mace and the ring should never become together or havoc will roam in the sky, land, and waters. Together they have the power of summoning the dark Lord Emperor and whoever wields it can inherit its power at the cost of losing one self in the process of restoring the dark Lord Emperor to life.
-lore submitted by TheFearOne in the Winter edition of Wiki Writer Forum Event 2019-2020.

The Tartarus Mace of the Emperor Set consists of Mace and Ring of Magic. The set can be worn by Dark Lord. The ring is available for all classes.

In game, the Excellent Tartarus Mace of the Emperor drops from Kundun and Maya. The Ancient Tartarus Mace of the Emperor Set parts drop from Kundun and the monsters in Land of Trials. Both Ancient and Excellent Maces can be made Semi Uber by adding the necessary jewels. You can check How to make Semi Uber sets if you need any additional information about this process.