Noria, the home world of the Fairy kingdom, are huge woods located in the easternmost of the MU Continent. Originally, Noria was once populated only by the Fairies, but after Kundun's invasion of MU, exchange between humans grew more frequent and human settlement in the region became more pronounced. Fairy characters all begin their careers within Noria. The region's location may seem trivial but as the access point for the East Sea and the underwater city of Atlans it plays a significant role. The Chaos Goblin that creates Chaos items and Wings through the unique Chaos System also resides here.

There are different monsters that you can find in Noria Map. Usually these are low level monsters ranging from Level 3 to Level 18 monsters.

Goblin is belligerent and fast. It has a small body so it is not so hard to fight with. Goblin is guarding the southwest plain of Noria, which is the easy monster to fight with second to Spider on MU Continent. The race of Goblin doesn??t like to fight and is obedient enough to be a partner for Fairy??s battle practice. However, you can be damaged by attack of Ring Scorpion if you think about only the battle with Goblin.

Ring Scorpion moves fast and has an ability of surprise attack. It is distributed extensively in Noria. Living near Noria, Ring Scorpion rolls itself to move by use of its small body and soft skin. It boasts of its fast movement. By use of its tail which is the only weapon of Ring Scorpion, it attacks adventurers.

It is the captain of Goblin race that unconditionally attacks the living things around itself under the control of Kundun without any decisive power. It tried to keep its race Goblin that doesn't like fighting, and it is available at the northwest of Noria. It is together with other strong monsters so it is not easy to hunt only Goblin Captain.

It is a mutant monster of gold bug. The evil atmosphere made it mutant. Distributed extensively in the west of Lorencia, Gold Bug Monster attacks, floating in the air by use of wings on its back. In a battle, it besieges and attacks in group so it is not easy to fight with. Therefore, whether to control the encircling net or not is the key to the battle. Its location is similar to that of Hunter so you should be careful for any sudden dangerous situation.

It is an undead monster that is brainwashed to recognize all the living things as enemies and to attack them. The spirit of a hunter is combined. It seizes the west woods of Noria, and its specialty is long-distance attack by use of Crossbow. Hunter is a master of Crossbow so you may have to return to the town to heal your injuries without making a counterattack. It is your decision whether to run away or to defeat with power, but you should be careful for the encircling attack that Gold Bug Monster joins.

It was born by injection of new energy into an evil spirit living in the woods near Noria. Living in the north and the east of Noria, Forest Monster moves fast by use of two strong legs and attacks with strong big nails. It likes to move in group so it may not be easy to fight with.

The evil spirit is put into this monster so it has very strong power. Its movements are slow, but its offensive power is very strong. Stone Monster that is mainly available at the east of Noria has a large stone body. Its physical strength is powerful as much as its big body, and its offensive power with its weight on is most fearful in Noria for adventures. 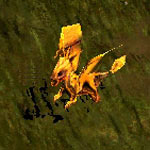 NPC (Non Player Character) that you will find in Noria are the following: