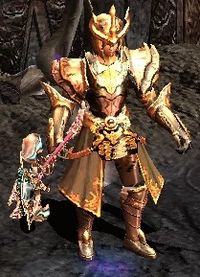 Centuries ago, a group of one hundred twenty human and goblin nomads settled in the depths of Aida. The living forest blessed them with an abundance in daily living necessities. Food, shelter, everything was provided to them as if they were favored by a god. Weeks later, a god who was later known to be Ra the Creator came down from the bright rays of the noon sun. The god spent a day with the settlers. They gave him offerings, bounties, and even a banquet for this magnificent day.

During that night as everyone circled around a huge bonfire, Ra gave them a responsibility and everyone seems eager to comply. Each of them were given a wondrous gemstone in the form of either a necklace or a ring. In exchange for the abundant nature, each of them must protect the gemstone with all they can as a covenant. Right before Ra descended to the very last ray of the sunset, he told them that a great danger will soon occur. Once the slightest hint of it does, he will send a Wizard with exceptional skills and they must give him those gems.

Alas, the day has come. The bright skies turned dark almost in an instant. The entire forest was shrieking, the ground was trembling, and all kinds of life forms either flew or ran away. A mysterious being came into the settlement, saying he will protect everyone from the dangers to come. Everyone was weary, wondering why this creature is so massive and completely different from what the god described to them. The settlers refused and provoked what they later called a beast. They challenged the creature to take it forcefully from them, and the worst happened. Kundun summoned countless strange looking monsters. He corrupted the living forest as well, causing it to attack all kinds of life forms on its surface. The settlement was devastated. Houses were burnt down to the ground, and only a very few of the nomads survived. Kundun stole the gemstones which are known to be Draconites both from those who survived and died. With this, he created an even stronger minion he calls Hell Maine.

The sun god Ra did not expect it to be sooner and was infuriated. Thus he called upon the promised Dark Wizard to defeat Kundun once and for all. A god can only do so much for divine intervention, so Ra only provided the wizard with enough power to kill this Hell Maine to take the Draconites. Eventually the wizard managed to kill the newly formed Hell Maine. The Draconites started to levitate and formed into a set of armor and a staff. The equipment magically wore itself onto the wizard which gave him tremendous magical attunement. He was making his way to kill Kundun but he must kill the surrounding minions before he could do so. There was just so many that Kundun eventually made a break for it.

The battle has ended. Some humans and goblins managed to live. The wizard spoke to them and sworn to avenge those who have died at any cost. Ever since, the wizard has been hunting down Hell Maines and Erohims to get leads in order to find and kill Kundun. The Draconites he collects from killing those higher beings will eventually be formed into a similar set of armor, as he was later accompanied by a Magic Gladiator.

The Excellent Ra Creation set is a Tier 1 Draco Set and consist of Helm, Armor, Pants, Gloves, Boots and Staff. The set can be worn by Soul Master and Magic Gladiator.

The uber Ra Creation set can be claimed with 120 Draconites via your account info panel in www.infinitymu.net.