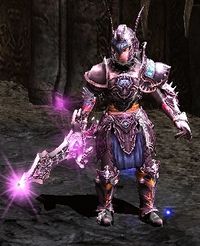 There was once a king who was told by an oracle that he could never have a son. He however had a daughter, and was prophesied by the same foreseer that she would bear a son. This son would later kill the king, as it was foretold. Out of jealousy and fear, the king locked his daughter up. The king was so afraid that the prophecy would turn into reality and would cause the end of his reign. Nevertheless, not a single prognostication by the oracle had proven to be false. Some time later after the princess's imprisonment, the god Zeus came into her cell. In the form of what seems to be a shower of gold, the god impregnated her and told her beforehand what his son's name would be. Eventually, the boy Perseus was born. The king learned about this but he wouldn't want to anger the gods by killing the mother and her child. Hence the king sent the two in a wooden chest, drifting across violent seas. They both ended up in the outskirts of Lorencia.

Growing up as a demigod, people around Perseus had noticed that he doesn't have a normal human's capabilities. Indeed, he inherited his father's wits and lust for battle which gave him an interest in wielding a sword. At this point, the mother and child are treated as commoners and Perseus was never told about his heritage. He later on turned out to be a renowned Dark Knight. He had a set of light armor and a sword although nothing special comes with it. Captivated by his mother's beauty, the richest man in Lorencia tried to forcefully marry his unwilling mother. The rich man hired a group sellswords in the case where Perseus would burst out of rage. Underlooking Perseus as just another commoner, he demanded Perseus to hand him the head of the gorgon Medusa in exchange of the cancellation of the forced proposal.

He went on the journey find and kill the mystical gorgon. During his journey, Zeus talked to him in a dream and told him about his bloodline and his mother's fate. The anger he felt fueled his rage so he rushed in finding the gorgon. Found at last, he fought, defeated, and beheaded Medusa, knowing that the head's petrifying properties would still work. He returned to the outskirts of Lorencia, killing the resisting sellswords and petrifying the rich man by facing Medusa's head towards the now a stone in the shape of a man. Some time later he decided to go back to his birth place to find his grandfather the king. It was also at that same time when the king was hosting an athletic game. Perseus had a plan on how to kill the king, but still intended to participate in the games. He was performing a discus throw when suddenly his trajectory made a sharp turn towards the astounded king which resulted in killing his grandfather instantly. He was captured but later the authority found out that he is the only heir to the throne. He became the new king and that what happened to the previous king was nothing but an accident and unintentional. He forged legends after legends and feats after feats during his reign. Most followers of his claim that Lorencia once asked for his aid during a dragon invasion. He defended Lorencia single handedly with the help of Medusa's severed head and this was considered to be his greatest tale. Thus he earned the title Perseus the Dragon Slayer. Undeniably, he has the strength of a god but after all, he still is a mortal human, and was later slain by his cousin, Megapenthes.

Several years later, only Perseus's equipment remain. The sword however is imbued by the eye of the gorgon Medusa. Rumor has it that those who are instilled by fear just by staring at the sword will turn to stone. Nonetheless, all of it were nothing but old rusted relics although it was treated nothing less than its first owner's worth. A certain collector managed to grab a hold of these relics. This collector had also been gathering a rare type of material called Draconite and have no idea as to what its purpose is. Out of curiosity, he tried melting down the said materials and thought what would happen if he coat Perseus's relics with it. The modification of Perseus's set of equipment and the mysterious powers brought by the Draconites have created the predominant set for slaying even the mightiest dragons and monsters in the Continent of MU.

The Excellent Perseus Dragon Slayer set is a Tier 1 Draco Set and consist of Helm, Armor, Pants, Gloves, Boots and Sword. The set can be worn by Blade Knight and Magic Gladiator.

The uber Perseus Dragon Slayer set can be claimed with 120 Draconites via your account info panel in www.infinitymu.net.

The set can also be completed in Excellent only, Ancient only and Semi Uber, in game. The Excellent Dragon Slayer parts drop from Lemulia’s Rudebox. The Ancient Perseus Dragon Slayer parts drop from Kundun and the monsters in Land of Trials. Both Ancient and Excellent parts can be made Semi Uber by adding the necessary jewels. You can check How to make Semi Uber sets if you need any additional information about this process.