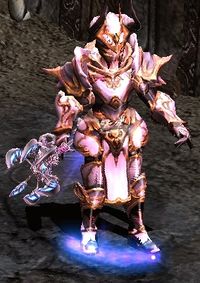 Seth, the great King of Loren, was one of the visionary kings, from iMU world, who believed that peace can help his people grow and develop. He also supported the fondation of Kanturu´s Refinery Tower so that his Warriors could use Elpis´s knowledge for upgrading their armors. For him, science was the key for a greater future. And so it was. The people loved Seth as he opened so many trade lines between all iMU great cities and because he supported merchants in tradings and his warriors in combats.

He was stubborn as a mule, but that only got his people plenty of happy and fruitful days. To symbolize his stubborness, his friend Hanzo, the great blacksmith of all iMU lands, forged a horned helm for his white set. The hole set was enhanced with a powerful and magical gemstone that was called draconite. But, as it happens in times of peace, a fowl sorcerer that craved power for himself, developed a plan to attack Valley of Loren and steal Seth’s throne. He found a way to lure Elpis out of the tower and entraped her into a spell, forcing her to create Harmony only for him and his army. Because of his nightmare spells that he used to inflict on people´s minds, infinitians knew him as Knightmare.

Seth tried to find reason with Nightmare, to find a way to prevent war, but Nightmare didn´t want to negociate. Therefore he had to prepare for his great battle in order to free Elpis from Nightmare´s spell.

After years of battles, the war finally ended. Elpis was returned to her Refinery tower and Nightmare was defeated but with such a great cost. Seth grew mad during Nightmare´s attack and he was never the same. Being trapped into his own madness, The Great King Seth was known as Seth, the Dark King, from then, on. Even though his face was harsh and dark with madness, the white glow of his set reminded people of his sacrifice. After his death, the armor that Seth wore was only used by the Lords that succeeded him. The bright colors of it still shine today on the brave Lords of iMU.

The Excellent Seth Dark King set is a Tier 1 Draco Set and consist of Helm, Armor, Pants, Gloves, Boots and Scepter. The set can be worn by Dark Lords and Lord Emperors.

The uber Seth Dark King set can be claimed with 120 Draconites via your account info panel in www.infinitymu.net.