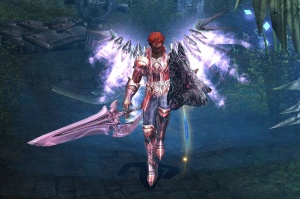 Aida is home of the vastest vegetation fields and forests in the continent of iMU. It is known to be ruled by the spirits and the creatures that reside here. It is also the place where Amy, the potion girl makes most of her potions. The main ingredient for her Mana Potions is extracted with the help of the Blue Golem from the Hyacinthum Adamantem, the blue spirit flowers that reside in Aida.

While on an aidian pilgrimage of her own, she met Moloch, a Magic Gladiator, who tried to adventure himself in the depths of Aida in the search for his own true meaning. They both helped each other in their tasks during the next few days. Moloch helped Amy with her potions cart and Amy showed him the secrets of Aida. The Hyacinthum Adamantem usually was situated in the heart of the realm. So the journey was long, but this was not a problem for the both of them because they had all the time in the world to explore, laugh and learn between the big green hills . But this was not a normal travel in Aida. Amy knew something happened since the Forest Orcs and Trees were all silent. She met with the Witch Queen who confirmed Amy’s suspicions. Something evil rose out of the earth and wreak havoc among the creatures. And that evil was Hell Maine. He only needed one signal from Lord Kundun so that he could rise up and help him conquer the iMU world, realm by realm. He rose in the heart of Aida turning everything into dust and poisoning all living life. The Hyacinthum Adamantem turned red and couldn’t be used to create the mana potions anymore. And the same thing happened to the spirits and creatures here. They all turned against each other, this being Hell Maine’s way of creating his army. Little by little, the red madness of Hell Maine covered Aida. In order for this to stop, Hell Maine needed to be defeated. The only problem was that there weren’t enough creatures to defeat his army, because the red madness turned each creature red once the red mist touched every living life. As a last resort, a sacrifice had to be done. Moloch took the task of attacking Hell Maine. In order for him to do that he needed the help of the spirits. Only this way he could have conjured the power needed to defeat the evil. The great Sacrifice Sword and Shield were born out of the sacrifice of the last creatures of Aida. Moloch has gained extended life from the Death Rider’s stones that are forged into the sword. The Blue Golem added the golden insertions for more power and the Witch Queen drained her own energy in The Sacrifice shield’s gemstones.

With his own skills and the conjured powers of the aidian spirits and creatures, Moloch fought Hell Maine. The fight was great and would have lasted a life time, if Moloch wouldn’t have cast the magic spell of Hell Fire that swallowed HellMaine, sending him back to the underground. The fight left the core of Aida devastated. Sadly the red mist still resides here, millennia after the big sacrifice that helped Moloch in defeating the evil. But, slowly but surely, with the magic help of time, the nature started healing itself. This way a lot of the realm’s area could have been accessible so people build graves and statues as a sign of respect for those who fell under the red mist of Hell Maine.

The Moloch Sacrifice set is an Uber Tier 2 Draco Set and consist of Armor, Pants, Gloves, Boots, Sword and Shield. The set can be worn by Magic Gladiator.

The Uber Moloch Sacrifice set can be claimed with 240 Draconites via your account info panel in www.infinitymu.net:

The set can also be completed in Excellent only, Ancient only and Semi Uber, in game. The Excellent Sacrifice parts drop from Lemulia’s Rudebox. The Ancient Moloch Sacrifice parts drop from Kundun and the monsters in Land of Trials. Both Ancient and Excellent parts can be made Semi Uber by adding the necessary jewels. You can check How to make Semi Uber sets if you need any additional information about this process.