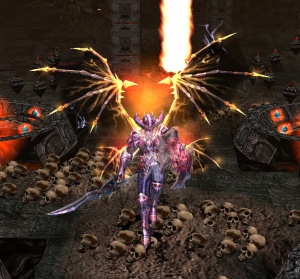 Before Lord Kundun plundered the Lost Tower, leaving it the wasteland that is it today, this place was known by all the infinitians as a great shrine. Creatures from all iMU’s corners gathered here in the search of knowledge and spiritual enlightenment. The shrine was composed of seven parts. Each of these parts worshiped a different god.

But, as it happens, the deities started to feel the need of proving which one of them is better than the other. Soon after, a god war started. In order for this big fire to be quenched, a great warrior had to rise up. This is how Marduk’s heroic story begins.

Marduk was born in Lorencia, grew up in the streets of the city, learning life lessons by collecting metal scraps for Hanzo, delivering scroll for Pasi and clearing tables for Liaman. He learned how people interact, how to differentiate good from wrong, how to help those in need and not to let himself be captured by evil. Even though he lived a harsh life, he always found a way to be positive.

When the god war begun he enrolled in the King’s army, hoping that his own will power would help win the fight. The only problem is that he didn’t have any experience with weapons. Of course he saw Hanzo making them out of the metal scraps he’s been collecting, or Liaman making potions with her magic but he didn’t have any special power at all, apart from being so positive and willing to change the wrong that’s been happening during this god war. Therefore he started training. Day by day he earned points by fighting alongside Poseidon, his friend from Atlans. Poseidon taught him the art of Defence and how to pay attention in skilled combat. Hanzo created him orbes that could upgrade his skills and also his energy. The special sword was forged so thin in a dynamic shape so that he could move as fast as the thunder that went through his wings.

Being prepared with a strong armor, skillful attacks and fierce attitude, he proudly filled his body with life flame and goes to battle. He didn’t want to kill any of the gods, only to remember them who they are and what good they did in the iMU world. Having this in mind, he challenged the seven gods in single combat. He made the first six kneel before him, but sadly, the seventh god was not that willing to be defeated. Therefore, Marduk had to end his life. Seeing Marduk’s strong attitude and knowledge, the kneeled six gods claimed he had the power of a God. As a sign of his victory, they created a six horned helm that could symbolize Marduk’s victory over them. To show his respect over the seventh God, Marduk forged his shield with the features of the god that didn’t want to get defeated.

The Uber Marduk Babylonian set can be claimed with 240 Draconites via your account info panel in www.infinitymu.net:

The set can also be completed in Excellent only, Ancient only and Semi Uber, in game. The Excellent Babylonian parts drop from Lemulia’s Rudebox. The Ancient Marduk Babylonian parts drop from Kundun and the monsters in Land of Trials. Both Ancient and Excellent parts can be made Semi Uber by adding the necessary jewels. You can check How to make Semi Uber sets if you need any additional information about this process.