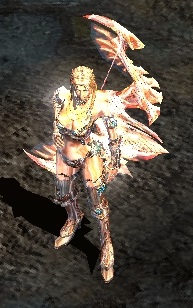 A king named Cepheus had a daughter named Andromeda with his wife Cassiopeia. Their daughter was so beautiful that Cassiopeia, her mother, claimed her be more beautiful than the sea spirits called Nereids. Poseidon, the god of the Sea, heared of Cassiopeia's arrogant statement of comparison and caused an outrage. The god threatened to attack their homeland and sent upon the sea monster Cetus. On top of it, Poseidon cursed Andromeda and had her tied on to a rock for the monster to ravage.

One day, Perseus, a well known warrior, just happened to pass by Atlans. He saw people running away and went closer to where they came from. When he got to the place, he saw a destroyed city but something caught his eye. A beautiful yet helpless and unclothed woman was about to be devastated by this huge sea monster. Without a second thought, he jumped right in, fought the monster and petrified it using the gorgon Medusa's visual prowess. When the monster was finally slain, he then rushed to unchain this fine figure chiseled by the gods, and immediately covered her with his cloak. Perseus married Andromeda, and promised to protect her for the rest of his life.

Due to the fact that Perseus is a man of the sword, he always had to go to some places far away. Due to this, whenever he's home, he teaches Andromeda all he knows about the bow. Later on it finally came to a point where she's able to protect herself on her own. Even so, Poseidon's curse and threat against her still seem to resurface every once in a while.

Eventually after several years, she died. Due to her being a beautiful and a brave woman, Athena placed her on the heavens as a group of stars. Due to this constellation being so powerful, Hell Maines and Erohims would gather chunks of ores from it and consume it to gain a huge leap in strength. These rocks and ores are called Draconites. A mysterious and skillful Elf kill these particular monsters and collect the Draconites that came from Andromeda's constellation. As some local tavern tales say, this Elf somewhat found a way to infuse the Draconites into her body and has gained Andromeda's beauty and astronomical powers. The bow she wields, as it is said, was made entirely out of Draconites.

The Andromeda Cursed set is an Uber Tier 1 Draco Set and consist of Helm, Armor, Pants, Gloves, Boots and Bow. The set can be worn by Muse Elf and the bow is destined for High Elves.

The Uber Andromeda Cursed set can be claimed with 120 Draconites via your account info panel in www.infinitymu.net: