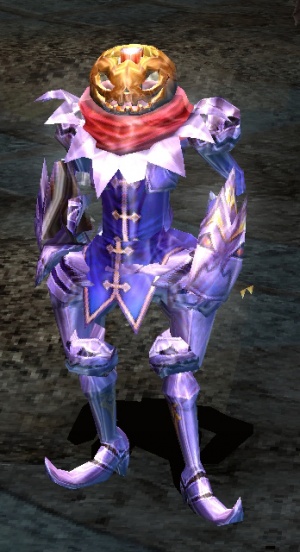 Jack was an orphan kid living in the outskirts of the Tower. During his childhood days, he was fond of playing Hide and Seek with his friend Imes. He then grew up to be a fine young Blade Master. One night during the preparation for the Halloween Festival, as Captain Marlon was patrolling near the Stadium. He saw a dark figure saying "The Invasion is coming!" and then disappeared. He then warned all the people of what happened. Jack decided to stop whatever Invasion was coming. He went to search for the treasure that his parents left for him. After talking to Vault Guardian, he got a stash with the word "Pumpkin" in it. He opened it and what he saw was five Halloween boxes and a letter. He read the letter they wrote before they passed away "Dear Jack, We are sorry we didn't get to see you grow up. We decided to help the people during the previous Invasion. Do the right thing and always remember, We always love you no matter what." With tears, Jack dropped the five Halloween boxes and they began glowing. They became a set of Helm, Armor, Gloves, Pants and Boots. He said to himself; I’m going to say goodbye to my old self. Mr. Jack O. Lantern is no more, from now on call me Pumpkin. And with those words, the set flew as if it they became part of himself.

Nearby, watching, was Amy the Potion Girl. She warned him about the Invasion. Pumpkin ignored the warnings. But Amy Insisted, “I can help you gain more power, with these Gemstones you can embed it in your gear to become stronger But in order to Unlock its full potential you need to awaken It”. With the help of Amy, he put the Stones in the Relics Chamber. The New Harmony Jewels began to fuse with Pumpkin's gear. "I feel like I gained more power”. Then he goes on. As he went back to the Tower, He met Arthur and Sacred. They heard about the invasion. They each gave him their share of gear. Arthur's Excallibur sword and Sacred Mace Of King plus a pendant and rings. They said that they will cover Lorencia, Devias and Dungeon but they can't cover the Tower so they entrusted it to him.

It is now October 31st and the sun is getting really low. He was looking for the Lost Tower when he saw something spawned like fortune Pouches. In the middle of it was a familiar looking figure. That's right, it was a monster that had an Armor, Helm, Gloves, Pants and Boots looking exactly liks his. The Creature said "The Invasion is successful! Soon all of you will bow down to me!" and a swarm of Fortune Pouches goes to attack him. With swift and might, Pumpkin said "That's not going to happen, As long as I’m here". Then in a brief ten minutes the fight ended and Pumpkin defeated them. Feeling humiliated, the creature spoke to him "This is not the end Pumpkin! We will come back after a year exactly at this moment and we will defeat you! Mark my words" and with that, He vanished.

The news quickly spread to the different parts of IMU and they all cheered and thanked Pumpkin who stopped the Invasion. With the Ceremony underway he removed his Helm, Armor, Gloves, Pants and Boots and put it in the Hall of Vault Guardian imparting the words. "Do not be afraid of the Invasion. Train yourselves and do not fret. For the Dark path of Macro is not with you. Anyone can use this Gear, be it a Muse Elf, a Soul Master, Magic Gladiator, Dark Lord, or a Blade Knight. As long as you have a pure heart and a desire to help, you will succeed." With these words the Ceremony concluded and hailed Pumpkin as one of the Best Warriors the world of IMU has ever seen.

- lore created and written by donthitme for InfinityMU community in the Summmer Edition of the Wiki Writer Event.

The Pumpkin Set is a special InfinityMU Set and consist of Helm, Armor, Pants, Gloves and Boots with an exclusive design. The set can be worn by any class.