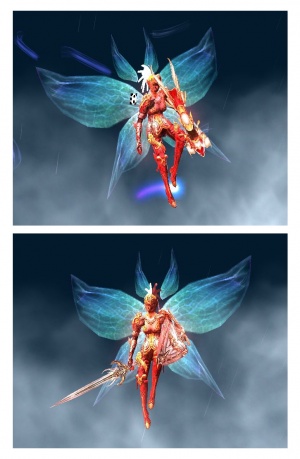 The Cassiopeia Queen set got its name after Cassiopeia Queen of Noria. She was the only daughter of Elrahim the High Elf of Noria and Guduud, the Witch of Aida. Elrahim knew that his time as King of the Norians was about to end so, in order to keep peace between Noria and Lorencia he asked his daughter Cassiopeia to marry Nemesus, the Grand Master of the Lorencian people. Nemesus had a harsh attitude and was known for his vanity and greed, but that didn’t stop Cassiopeia to do what her father asked her to do, for the sake of her people. Therefore, the new rule of Cassiopeia and Nemesis would be installed after Elrahim’s death.

The new union was received with joy by all kings of the iMU realms. As a sign of agreement, Cassiopeia was gifted this beaufitul white set with gold inserts and jewels. The white armor of the set was forged by three hands: Maya’s in the Refinery Tower, Kundun’s in Kalima and Balgass’s in his Barracks. The jewels were added by the four giants of Draco: Erohim, Hell Maine, Ancalagon and Lemulia. The golden details were molded in the depths of Tarkan by Meraxes, the Golden Tantalos. The set meant to symbolize the purity and beauty of Cassiopeia.

The years past by and both Nemesus and Cassiopeia grew fond of each other. But the love of his wife was not enough for Nemesus’s ego. He wanted to see himself ruler of the Norian realm sooner therefore, in one night he killed Elrahim. Being governed by grief and fury, Cassiopeia struggled with the decision of killing her loved one. She couldn’t reply his husband’s act in the same manner so she decided that the best way to punish Nemesus was to bind him for eternity in a Stern spell. Helped by her mother, she confined Nemesus in the purple spell of Stern. The blood of Nemesus tainted the white color of Cassiopeia’s armor making it red for eternity.

The Cassiopeia Queen set is an Uber Tier 2 Draco Set and consist of Helm, Armor, Pants, Gloves, Boots, Bow, Sword and Shield. The armor set, sword and shield can be worn by Muse and High elves. However, the bow is destined for High Elves only.

The Uber Cassiopeia Queen set can be claimed with 240 Draconites via your account info panel in www.infinitymu.net: