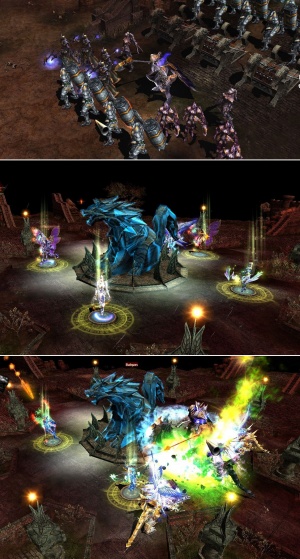 The enormous statue in the center of the Crywolf fortress is the Wolf Statue. It has power given from the elves to protect itself and the fortress from evil spirits when the Kundun forces invade the continent of MU and especially Crywolf.It's power is weaken twice day and this is the time when Balgass attacks.

The statue is protected with 5 altars. The altars are only accessed by Elves and only they can protect and give power to the Wolf Statue. Other players must guard the Elves and the altars. If the Elves are killed by Balgass or members of Balgass’s army, and the altars are destroyed, there is nothing protecting the statute from destruction and the event is lost.

Requirements and place of action

You need to protect the Wolf Statue from Balgass and his army. The Elves connect to the altars in order to raise a HP protective shield around the statue. The other players need to attack the monsters from Balgass’s army and also Balgass. The event is won if there will be elves still connected to the altars and Balkass will be killed. You can see how this event plays from the perspective of a Knight.

When Crywolf Event starts the village will change from a safety zone to battle zone and players can't use their personal store or talk to the NPC.

For the event to start and continue, at least one Elf above lvl 350 should stand in contract circle (the red circle) around statue and connect to it when the event commences. There can be up to 5 elves connected to the 5 existing altars. The main task is to protect the Wolf Statue. Only Elves can do it by connecting to the altars near the statue. Players must protect the elves from the attack of the enemies.

Crywolf Event will run for 20 minutes and during this time Balgass’s Army will try to invade and kill the elves for Balgass to Capture the Statue.

The more Elf you have in contract with the altars, the harder it will be for Balgass to capture the Crywolf Statue. There is a tricky situation tho’ because you cannot connect to the altar indefinitely. You have only 2 opportunities after which the altar will be broken and you cannot connect anymore. Therefore the elves must not move at all from the altar.

Here is a Hunter's perspective of this event:


You must defend the Wolf Statue from Balgass & His Army at all cost to win the Crywolf Event. When the character gets killed in the battle it will resurrect at the beginning of the map. If there will be only one elf connected to the altar and the elf will get disconnected, or killed, the event will be lost. 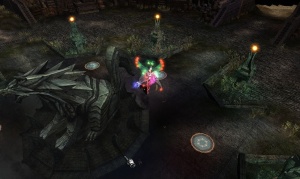