What is it with you that I get so obsessed?
For you, I fight and try to win this contest.
More than a hundred competitors, I weekly face.
Just to feel your amazing grace.


I won't have a chance if I do not focus.
Play with all my might and bring my Horus.
I will offer my mind, heart, and spirit.
My beloved castle siege, you are worth it.

-entry submitted by Apollo in the InfinityMU Author Event, September 2019.

Have you ever wondered what was so special about the renowned Castle Siege event and couldn’t participate because you have no information about it? Well, this article is exactly what you need to read if you find yourself in that dilemma.


This CS guide is here to initiate you in the Castle Siege event terms and tactics so that you won’t lose yourself among all those infinitians during the event.


First things first, let us familiarize with some of the Castle Siege basic information:

When and Where is the event taking place?

There are two types of guilds during this event. The Offensive and the Defensive teams.

What is the Defensive Team doing?

They protect the castle, preventing the attackers to take the switch (you probably heard “I will be a switcher” in your guild) and/or seal. At the beginning of the event, they are already inside the Castle, preparing to defend.

What is the Offensive Team doing?

They try to take on the switches so that the Main Guild Master of the Ally could seal. At the beginning of the event, they are in the Valley of Loren, the citadel area, where they are attacking the statues in order to gain access inside the castle.

What is the "Switch"?

If you are a GM and want to participate in this event you should know these: 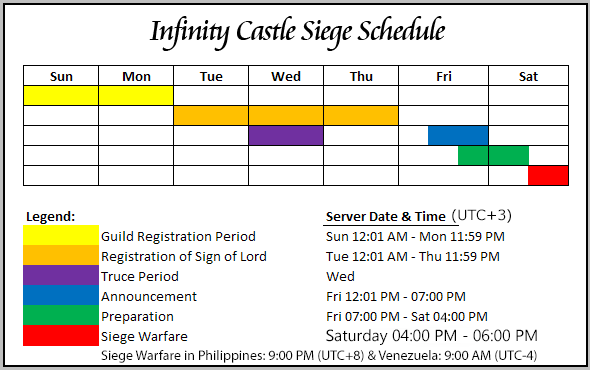 If you are a regular player and want to participate in Castle Siege, you should know this:

ELF(ME/HE): The elf can be a buffer for Damage and Defence but can also heal members while they are in combat with the enemy. Keep in mind that the Damage and Defence buff only last for 1 minute therefore it would be better for the party members to stay close in order to have buff all the time. The elves can ice enemies with ice arrow and also kill enemy attackers.

WIZZ(SM/GM): The wizz is very important for Soul Barrier, also known as MS. The MS lasts aprox. 7 min. If a player does not have MS and swell, he/she could die in just 1 hit, no matter what set is wearing, Uber or FO(Full Option). Wizzes can also ice the enemies with Ice Storm and also use Lightning Bolt to extract the Switchers and the Sealers from their places. Wizzes can be Switchers too, as well as attackers if they have enough damage to do it.

KNIGHTS(DK/BK/BM): Knights have the long lasting life potion that makes wonders, that’s called Greater Fortitude, or Swell. The Swell lasts for 5 minutes so the same thing is applied here: keep all the party members together. All players need swell in order for them to keep fighting while getting the switches or sealing. The main role of the Knights in Castle Siege is of a fighter. They need to get rid of the enemies.

LORDS(DL/LE): The Lords are mainly pretty good at sealing and grabbing the switches. They can also buff the party members with Crit and they use Stomp to disperse the enemy just like the Wizz is doing with the Lightning Bolt. They can also attack the enemies, besides buffing, stomping and sealing/switching. Also the Lords can summon party members. That is the only warp command that is allowed in Castle Siege. The DL can only warp if it’s not switching. The Critical Damage buff of a DL lasts for 55 minutes.

GLADIATOR(MG/DM): The Gladiators are the Kight’s best friend, as they kill the enemies together.

CS Party Tip: The party is the main element that keeps the Castle Siege armies together and in shape. Therefore, in order for the party to be successful, the party members should work together and move together. This way they will always benefit from the swell/buffs/MS/crit because you can’t use Buff Master's buffs in CS.

What can you win by being a Castle Owner?

If you are a Castle Siege winner, you can get numerous of prizes:


Prize #1 – 120 Rings of Wind, FO, also known as ROW. If the same Alliance wins for the second time or more in a row then the reward will be 120 ROWs + 25,000 Gold Credits distributed to accounts of choice by the main Guild Master of the Alliance. Note: This is to keep safe the market from inflation and prevent the same CS owners into getting crazy rich!


Prize #2 - The Castle Owner Guild will receive all the Signs of Lord he/she registered, back.


Prize #3 - Becoming a bit more famous @ the forum of InfinityMU! The Alliance Leader (The CastleOwner) will automatically receive the tag in forums. The other members of the winning alliance must send a forum PM to the Head Event Master with a valid Screenshot taken at the end of the siege. Besides the Castle Owner Tag, everyone who sends a screenshot is rewarded with 3 IMES Points or IMES Reaper on someone Preview:

For all guild members:

+ If a guild can achieve 10 consecutive CS wins, we will feature their guild in the Wiki.


Prize #4: Land of Trials. Being a castle owner gets you to access Land of Trials. Here the SOLs dropping rate is higher and you can get Ancient items from killing the mobs. Also, the Excellent items that drop here have more than 1 excellent option.