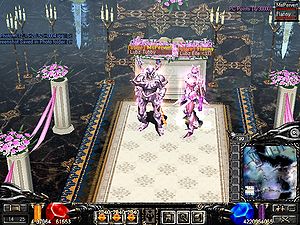 Marriage is as sacred as it is anywhere else in the world. However in the lands of Mu continent, meaning of marriage is much more deeper. Marriage of two results in bonding the couples fate togetter. They, after the bonding, become a beacon to each other. Not only their bodies are connected, but also their minds bonded. Thus they would know where the other is, or when the other is awake. Marriage allows the couples to find each other in an instant thanks to their improved senses for each other, thus they can fight against the dangers togetter. For attacking one requires taking on the other.

Marriage between female and male character is possible only at one place. To marry the couples have to go in Devias 2 alias the wedding castle and present themselves to the priest.

Female character must stands on co-ordinates 14 26, and Male on 14 25. The male type following command: /marry character. Where "character" stands for the name of the female character. Then the female have to accept the marriage or refuse it.

In successful marriages, there will be a global post, congratulating the couple for their newly marriage.

Now after accepted marry both characters can use some commands which are:

By typing /tracemarry one of the couples can trace their other half, meaning instantly warping to his/her exact coordinates. The other half of the couple needs to be online for this to work properly.

By typing /divorce players can divorce and free themselves from the marriage. For this to work, both players needs to write it in same moments.

By typing /forcedivorce one side of the couple can divorce even without the consent of the other half. This is useful when the player does not wishes to be married with an inactive player.